Temples and elephants in Luang Prabang

The center of the Old Kingdom and one of the most prestigious World Heritage Sites in Southeast Asia, Luang Prabang has a very unique atmosphere. The city is nestled amidst lush mountains at the crossroads of two rivers, forming a collage of temples and colonialist architecture. 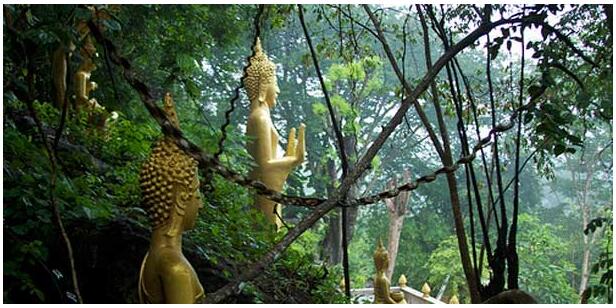 The general atmosphere glows with relaxation and since Luang Prabang is a relatively small place you should for one time leave a travel guide to the hotel and go on an adventure in the middle of small alleys and temples. You certainly won’t get lost here.

If anything, then the temples are a trademark of Luang Prabang. The downtown area is full of small colorful places of prayer, representing different eras and genres. The funniest thing is to stop by the temple to discuss the meaning of life or the latest technologies with local monks who are always excited to give their own point of view as a matter of fact. Alternatively, sit in the café and enjoy watching people with a cold drink.

The best temples in the city are Wat Xieng Thong, Wat Wisunarat, Wat Mai Suwannaphumaham and Phu Si on a hill. You should get up to the latter well in advance of sunset to reserve the best seating for incredibly beautiful views. The horizon reflects the pristine mountains and the traditional wooden boats flying along the Mekong below.

There is also a lot to see outside the city. Within a short distance you will find waterfalls, caves and an elephant reserve. For those who want a special experience, a day’s motorcycle trip on an old Soviet-era Minsk is full of adrenaline. At the same time, you can see the countryside in a way that would not even be possible by car.

The post-sunset time is active in Luang Prabang. Every night, a fairly large market is built locally along the main street, where you can find traditional crafts and of course Beerlao t-shirts. Dinner is also worth trying in one of several street canteens, where the offer is tasty and above all cheap. However, in the event of rain, the market can quickly be in the package.

Often described as the most relaxed in the world, the capital, Vientiane, is a nicely compact ensemble worth booking for a few days. One of the most magnificent temples in Laos, diverse shopping opportunities and spectacular Sunsets along the Mekong River keep your interest well maintained. Best of all is the proximity to attractions and often the easiest is to walk from one destination to another.

Although the temples color virtually every street corner, they differ greatly in style. The most famous and definitely to be seen is the gold-colored Stupa Pha That Luang, which is also the national symbol of Laos. The stupa was originally built between 1100 and 1300 years. It has had to be rebuilt several times due to the wars.

It is also said that the Buddha’s chest itself was at some point buried in the middle of the Stupa. All in all, the Stupa looks great in the splendor of the golden towers and evokes a lot of images of the old world kingdom. Other points of interest include Wat Si Saket, Haw Pha Kaeo and Wat Ong Teu Mahawihan.

For those looking for shopping therapy, Talat Sao’s morning market is a real commodity oasis, with almost anything between earth and sky along the narrow corridors. Sunglasses, antiques, clothing, foodstuffs; everything can be found here.

Bargaining is essential. The final price is usually about half the amount originally requested by the seller. However, plastering always happens in a good spirit. Small sums should not unnecessarily offend your own or the seller’s opinion.

The city’s best restaurants are French-inspired, such as Le Provençal or Le Côte d’Azur, where the meals perfectly represent a fusion of European and local cuisine. For those looking for a snack, the central square area is full of great cafes and bakeries. For those looking for homemade cakes, there is even a Scandinavian bakery where you can get cakes and ice cream.

Plain of Jars – a sea of ​​mystical urns

The very unique and Stonehenge-style mystical Plain of Jars is located in the remote northeastern part of Laos. The area has a similar cultural significance to the Angkor temples in Cambodia, but historians are still preoccupied with the history of the urns and the reason for its existence in general.

About 400 urns of various sizes, which were worked about 1,500 to 2,000 years ago, have been sprinkled over a fairly large area. It is generally believed that Mon-Khmer built urns either for funerals or for food storage. In any case, several human remains have been found in the immediate vicinity.

During the Vietnam War, the area was used as a base for Laotian forces, as a result of which the area was bombed with a heavy hand, as evidenced by environmental bombers. Until 10 years ago, the area was closed to foreigners and very dangerous due to unexploded ordnance. Since then, however, the area around the urn has been cleaned up, but it is still not advisable to go outside the marked areas.

The best way to explore the destination is to take an organized day trip from Phonsavan, which is also the nearest transport hub and the best place to stay, about 15 kilometers from the Plain of Jars.

THE BEST OF LAOS

Abbreviated as LAO by abbreviationfinder, the biggest cities of Laos include Vientiane, Pakse, and Thakhek.