Thus various secret societies were formed, in which they wanted to prepare the constitutional monarchy (some isolated people dreamed of a republic), and with the now traditional mentality of “reforms from above” there was talk of abolishing serfdom by decree. Young aristocrats full of noble ideals and a spirit of sacrifice; concrete interests of bourgeois classes that are beginning to make themselves felt; deaf discontent of the peasant masses: this is in a few strokes the picture of Russia in those years. But the projects of the more “progressive” aristocrats and intellectuals underestimate the strength of the autocratic state apparatus and they do not want or know not to set in motion the vast masses of people, especially peasants. They are thus isolated and, although the membership of several officers can help provide weapons, repression is not difficult; once the repression is complete, the whole movement is liquidated. The revolt of December 1825, known (from the Russian name of the month in which it took place) as the revolt of the “Decembrists”, was bloody but with relative ease repressed, precisely for these reasons.

The reign of Nicholas I. – When Alexander died on November 19, 1825, Constantine having renounced the crown, the accession to the throne of the new emperor begins with the merciless punishment of the Decembrists. Unlike his brother Alessandro, Nicola had had a more fully militaristic education: he did not even know his brother’s transitory liberal enthusiasms. Deeply rooted in him was the idea that the autocratic form of government corresponded to the tradition and needs of Russia, and that the will of God required him not to touch that tradition. Very suspicious of the nobility for their participation in the revolt of the Decembrists, he increasingly strengthened the bureaucratic and police apparatus: clerks and policemen became a real “new class”. In fact the the force apparatus of the autocracy was very seriously strengthened; no rebellion could have taken place with a minimum chance of success. But the situation of the country was no longer that of the times of Paul I: the culture had spread, the intellectuals had considerably increased in number; among nobles as well as bourgeois, sympathy for liberal ideas increased, interest in social problems, the desire to participate in the life of Russia. If on the surface the domination of the autocracy appeared unchallenged, almost the whole world of culture was, at least in its heart, opposed to the regime of Nicholas I. Moreover, there was an urgency that the problem of serfdom be faced. In the recently founded industrial enterprises, there was a need for a helping hand. “free” work. But even on this burning problem, Nicholas limited himself to a few vague promises, towards the end of his reign.

A severe censorship hampered the independence of newspapers and magazines even in the most timid manifestations; some middle and high schools were founded, but at the same time the vigilance against “dangerous” ideas was doubled; an important financial reform was carried out: the silver ruble became the monetary unit; a collection of the laws of the empire was made.

Political life developed underground or in diners that had a philosophical-literary aspect. At first, even the small groups of “Slavophiles” and “Westernists” have the appearance of a cenacle: the former believe that the development of Russia will be completely different from that of Europe, they exalt orthodoxy as the purest form of Christianity, they take various ideas on loan to the German idealists, they dream of a paternalistic autocracy; the latter will soon be inspired by more or less materialistic ideas, they believe that Russia will have to civilize itself by accepting the progressivism of Europe and European science. There is a lot of naivety among both, but both represent (to varying degrees) a breath of new life, limited for a long time to dinners,

Occidentalists and Slavophiles are adversaries, which does not exclude that between the most notable talents of the two fields there are not various points of contact. 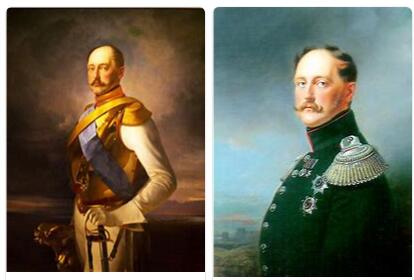