The Kejimkujik National Park and Historic Site is located in the province of Nova Scotia, in eastern Canada. Founded in 1974, it is divided into a main and a secondary park (the so-called Seaside) and covers a total area of ​​around 403 square kilometers.

The park was named after its largest lake, Kejimkujik Lake, and is called “Keji” for short by the Canadians themselves. The name was coined by the Mi’kmaq Indians and is often translated as “swollen water”.

The Kejimkujik National Park and Historic Site has been designated as a light protection area (Kejimkujik Dark Sky Preserve) since 2010.

The main park is located in central southwest Nova Scotia and is accessed via Route 8. The closest towns are west of Digby and south of Halifax.

The park itself is located in the center of Canada’s second largest biosphere and consists of 21 different forest types, most of them mixed forests.

Hiking comes first in Kejimkujik National Park and National Historic Site . 60 percent of the park can only be reached on foot or by canoe. On 15 hiking trails, each one to five kilometers long, the diversity and beauty of the park can already be admired over a short distance.

It is possible to explore the park on your own, on hiking trails from 23 km to 61 km in length. The “Mersey Meadow” hiking trail is also handicapped accessible and offers the opportunity to watch beavers and ducks on a platform.

The park invites you to go hiking, especially in autumn, when the foliage briefly immerses the forests in the full color spectrum of the Indian summer, the temperatures are pleasant and insects no longer get in touch with the visitors.

There are several options for camping in the park. In addition to the Jeremy’s Bay Campground, where you can stay overnight in tents or trailers, secluded campsites are also available. These can be reached on foot or in a canoe after consultation with the park management.

In 2010 Kejimkujik National Park and National Historic Site was admitted to the Royal Astronomical Society of Canada, which obliges the park administration to avoid light pollution.

In the park the vastness of space and the twinkling of the stars can be observed in a special way. For all those interested, there are also public programs that explain the constellations and give an overview of the nocturnal life of the park’s organisms.

Those who prefer to discover the picturesque water world can pave their way through the park on the thousand-year-old canoe trails of the Mi’kmaq. Today’s park, formerly the habitat of the Mi’kmaq, was used as a link between the Bay of Fundy and the Atlantic.

While the forest is reflected in the water, countless birds and other Canadian animals, such as elk and beaver, can be observed in an untouched and natural environment.

Longer routes are also possible on a canoe; the transitions between the waterways are relatively short at 150 meters to two kilometers.

It is also possible to conquer the magical hiking trails by bike, like fishing the Mi’kmaq in Kejimkujik Lake, watching the unique birds of Canada or simply having a picnic in the forest in a group.

With its pleasant temperatures, which fluctuate between -5 ° C in winter and + 18 ° C in summer, Kejimkujik Park invites visitors all year round. With the Discovery Pass, both the main and the secondary park can be explored.

The Mi’kmaq , cultural preserver of the Kejimkujik National Park and National Historic Site

As the only national park in Canada, the Kejimkujik National Park is not only a national park, because of the Mi’kmaq Indians living there, it also bears the seal of a “National Historic Site”. This means that the entire park is of great cultural and archaeological importance to the country of Canada.

The history of the Mi’kmaq probably begins as early as 8400 BC. BC, long before the pyramids and Stonehenge. Around 3000 BC They settled at Kejimkujik Lake. The approximately 500 different petroglyphs, pictures carved in stone, provide information about the Mi’kmaq and are a unique testimony to their culture.

They were made around 1200 AD and show motifs from the life and legends of the Mi’kmaq, such as the mystical Kulloo bird or Jipijka’m, a horned snake. Interestingly, Christian motifs can also be seen in later petroglyphs, most likely inspired by Christian missionaries.

The seaside of Kejimkujik National Park and National Historic Site

In 1988 the Kejimkujik National Park and National Historic Site was added to an area about 25 km long east of Liverpool.

Located on the Atlantic coast and accessible via Highway 103, the side park was named Seaside.

The spacious seaside is one of the few completely untouched coastal regions of Canada and welcomes the visitor with gleaming white beaches, crystal clear, turquoise water and the scent of wild roses. The animal world of the Seaside is also fascinating.

Seals are particularly popular, but comorans, pluvialis, great blue herons, wild mink, osprey and even the rare black bears can be admired. 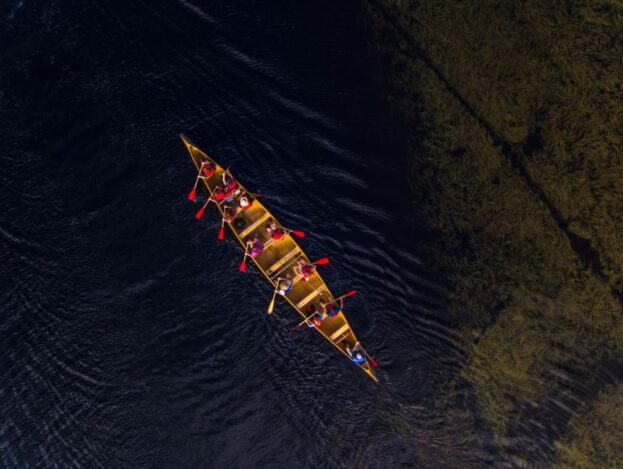